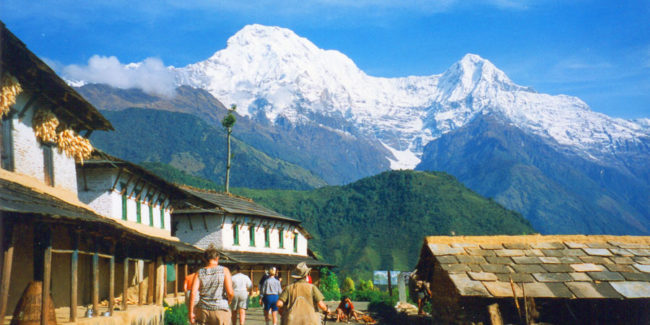 When you hear the name Nepal, what’s the first thing that comes to your mind? Most will immediately go for Mount Everest since it’s the highest peak on Earth. And that’s one way to look at things. Other ways, on the other hand, we think of all the different experiences/pleasures that you must enjoy on your way to the Big Man. Think of these two different kinds of scenarios: the people in Tansen (a western town) and those in Bohemian. Anyone you ask will associate the people in both places with friendliness—which even has history to back it up.

After that, we have the likes of the Gyoko Lakes for all of our ‘inner tourists’, deep/refreshing drinks straight from the lands, and a welcome break from spending so much on food and accommodation. And throughout, still keep in mind that it’s the people that especially make the trip almost seem perfect.

The things to know before you travel to Nepal

With the intro handled, let’s talk about the real thing. You’re obviously going to a place you’ve probably never been to before. And in places where you’re not a native, you need an update on all the essentials you’ll find there.

First up! Let’s talk about the features of the Nepali people that you must notice and adjust to. There are very different indigenous and ethnic groups in the country. That means different religions, and thus arts and even practices. That means different festivals and rituals depending on which time it is you want to go there.

Following that point, all cultural features in Nepal are as a result of 2 major groups. They are Hinduism and Buddhism. Despite the variety, the people thrive in diversity so you’re technically just another part of a system they’re very familiar with.

Specifically, around 80% of the population in Nepal practices Hinduism. And they can be found in the form of the Chhetris and Brahmins (Bahun in native language), which are the first two most populous group in Nepal. If your destination is Mount Everest, statistics say that you’ll always meet both of them on your way there. That means you’ll mostly see their customs and its that features the most.

After you’ve met your fair share of people who practice Hinduism, the other notable chunk of the population after that houses the country’s natives who practice Buddhism. Like the above (though we didn’t mention it), their religion allows them to easily accept each other. Evidence of that is the fact that the Chhetris and Bahun share temples (Muktinath Temple) with practitioners of Buddhism.

With just the presence of these two major groups, be sure to visit their festivals for explicit dancing and eating exotic food. Just make sure to wait until evening when the festivities come to an end.

Simply put, Nepal’s diversity in religions, and thus, the people and their various elements give you a wide range of native food to sample. But if you’re going to get our points very well, let’s take a structured approach.

You remember when we talked about the diversity in religion and thus, food (although Asian)—you need to add the advantage that their religion gives them. That is, lack of boundaries make it extremely easy to learn different spices and techniques from the neighboring countries. Those are China which is large itself, and then India for its rich culture/history. The end result of all this are dishes that have more vegetable (popular are potatoes, pepper, lentils, etc) than fat in them. That can be in as many combinations as you can think of.

Nepalese Food You Need to Try

True, amongst the Nepali, you’ll find dishes like Chow Mein which is modern since it takes after Chinese stir-fried noodles—and old cuisines with ethnic tags like Khas, Himalayan, Thakali, and Newars. Still, there are some dishes that you need to try if you’re ever in the area for anything at all. They are

Yes, it is. Propaganda from the Government has tagged “Safety” with the idea of Nepal in anyone’s mind. This is to an extent that everybody must ask that famous question. The only thing we have here to say on the matter is also because of the people. They understand that tourism is part of their economy and they’ll only show their gratefulness by being friendly and helpful. It’s an understanding that’s both emotional and logical, which is a rarity these days.

What Not to Do to Stay Healthy?

Staying healthy in Nepal is actually very easy. The only thing you’ll do is to remember these tips well.

Most of the tap water and river water aren’t good enough to drink. As visitors, we advise that you take part in the bottled water, purification tablets, or simply boiling water. If you choose the later, know that the higher you go in the region, the longer you have to boil the water. Make sure you drink enough to stay far away from dehydration.

There’s something called the Total Bacteria Count, otherwise known as TBC—and in the milk in Nepal, the bacteria count is that kind of high which just doesn’t pass for healthy. That being said, stay far away from raw milk.

No matter how natural with the environment the dog or even any animals at all looks, do not touch them. No rubbing, since rabies is a 1lil bit common on their bodies. If you do have contact with them through maybe their licks or even worse, a bite, make sure you either clean up or you immediately use a rabies injection. Be vigilant here a bit, please!

What is Nepal known for?

Nepal is known for a lot of things. And amongst them is even something as simple as their dumpling (Momo). Still, the world loves them for the fact that despite being so different in terms of customs, they’ve accomplished perfect harmony. The traditions are rich and the food is different, yet right, it’s colony free so it doesn’t even have an independence day, and there are a lot of tourists sites. Big Daddy, as we mentioned, is one. The other can be the Boudhanath or even the Muktinath temple. You can go to any of these wish-fulfilling stupas if you want an excellent view of what they offer you.

We just think you should always remember all of these things regardless of your purpose in Nepal. Business might see you going there to capture the cultural aspect of things. Pleasure might see you fully embracing the festivities, and the sights will drive in different hikers and other types of tourists. Following that, if you’re going there for the spiritual aspect, you’re fully good to go. The people are welcoming and in a way, they’ll easily keep up with your expectations. The experiences are actually different enough to let you think of it as a lucky break from everything. Just think of the experience if you bring your family along.