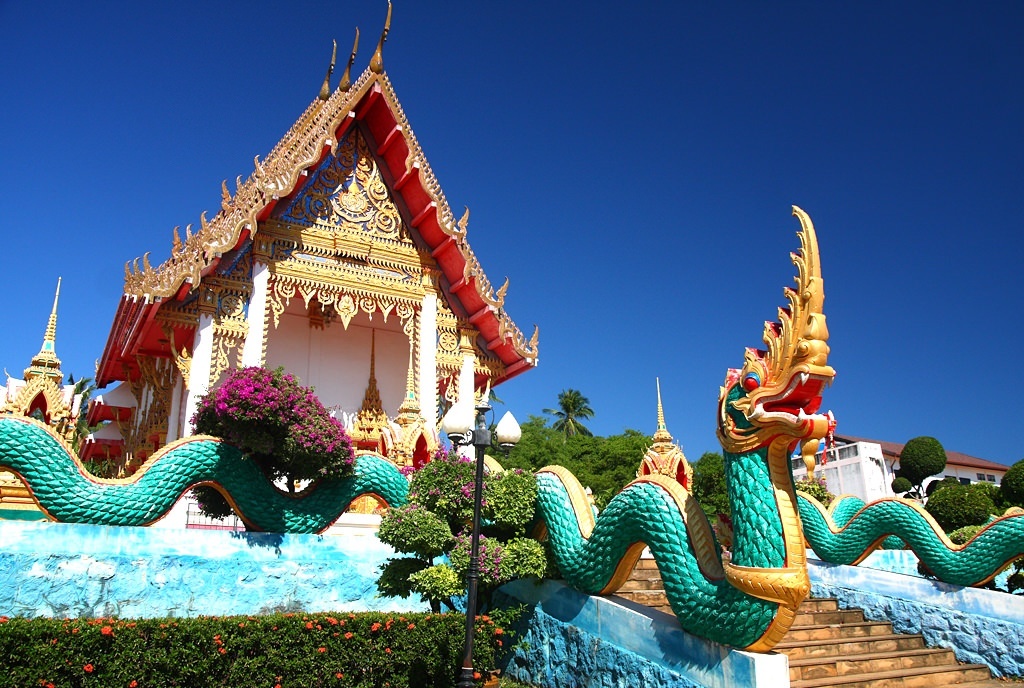 There comes a time in every Phuket holiday when visitors get the urge to go sightseeing. Sure, it’s great fun to relax by the pool at your Phuket hotel or to enjoy one of the many sublime Phuket beaches – and some visitors don’t want to do much else all holiday! But when you have settled down into the easy-going pace of life in Phuket, you may wish to seek out some of the local culture. Some of the most spectacular and beautiful buildings in Phuket are the many temples, where Phuket’s Buddhist monks live and worship.

Do’s and Dont’s not to forget

If you plan on visiting a temple, there are a few basic rules to remember. Leave your shoes outside the temple, and make sure you wear modest clothing – skirts and shorts should be below the knee, and your shoulders should be covered. You should never point your feet at a monk or a Buddha image. A Thai Buddhist monk is not allowed to touch a woman, so women should be careful not to make any physical contact, even accidentally. If you are confident or with a Thai friend, you are welcome to join in the elaborate rituals, which involve burning candles and incense, sticking gold leaf onto a Buddha image, and many other religious acts. If in doubt, just copy what everybody else is doing!

Wat Chalong (Chalong Temple) is the biggest temple in Phuket, and attracts the most visitors of any Phuket temple. Many tales and legends surround this magnificent 200 year-old temple, but most tourists come to see the lavish statues and the exquisite architecture. The surrounding gardens are extremely beautiful, and there are several concession stands selling food and drink at surprisingly reasonable prices. Should you find yourself low on money, the temple even has an ATM that you can use.

In and around Phuket Town, there are many Chinese temples and shrines that you can visit. One of the most celebrated is the Jui Tui Chinese Temple, which is located right beside Put Jaw Chinese Temple, the oldest Chinese Temple on the island. Jui Tui is an integral part of Phuket’s annual Vegetarian Festival, which is famous for its spectacular morning parades where people thrust knives, swords and many other objects through their bodies in an act of religious devotion. Like most Chinese temples, the red and gold colors are prominent, and Jui Tui features impressive statues of dragons and lions.

Wat Phra Thong is a temple in Thalang that is built around an interesting local legend. The story has it that a young boy tied his buffalo to something protruding from the ground – later both he and the buffalo died mysteriously. When local villagers investigated, they discovered that the object was a gold spire from a Buddha images head. They immediately set about trying to dig up the Buddha image, but those who dug were all stung by wild hornets that rose from the earth. Thalang’s local leader ordered that the image be sheltered by a building and not touched again. When Thailand was briefly invaded by Burmese troops, the Burmese tried to dig up the Buddha image as a prize – however they were bitten by swarms of ants and hundreds of them died before they fled. Finally a temple was built around the image, and it is still preserved to this day. Visitors are welcome to the temple, but touching the Buddha image is not recommended!

Wat Phra Nang Sang in Thalang is reckoned to have been built over 500 years ago, making it the oldest temple in Phuket. It has a unique collection of tin Buddha images, which were crafted when tin was considered a precious metal. Interestingly, two of the Buddha images were ceremonially opened and discovered to contain two enormous Buddha heads made of tin – the largest tin Buddha heads in the world. It is thought by many that the local people made the tin Buddha images in order to conceal the precious tin heads from the approaching Burmese invaders. There are statues of the Two Heroines of Phuket here – the brave local women were credited for repelling the Burmese attack on Phuket with a mixture of bravery and cunning. They dressed thousands of Phuket women in Thai army uniforms, convincing the Burmese that a large force of troops had arrived from Bangkok, and the Burmese ended up retreating.

In many ways, the most impressive temple in the whole of Phuket is at the Big Buddha site. While the temple itself is not the most magnificent building in Phuket, it is a temple where monks live and worship, and has all the statues and finery that a seasoned visitor to Phuket’s Buddhist temples might expect. But of course the massive 45 meter high Big Buddha image dominates the local skyline, and provides possibly the best views over Phuket to be found anywhere on the island. Big Buddha is still under construction, but it is already regarded as one of Phuket’s most beautiful landmarks, and the sheer scale of Big Buddha is breathtaking.