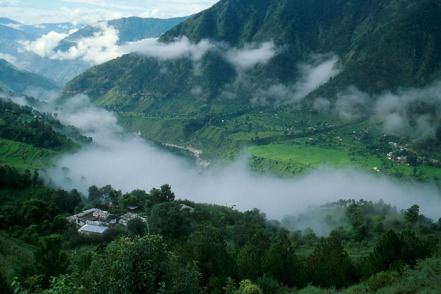 Situated in North India, Himachal Pradesh (Abode of Snow) is surrounded by Jammu & Kashmir on the north; Punjab, Haryana, Uttar Pradesh to the south; Uttaranchal to the south east and the Chinese territory of Tibet to the east. The state is mostly covered by the low Shivalik hill range towards the south and the dramatically high trans-Himalayan ranges as you go north. Thus you can proceed from hill-town Dharamsala in the south, at 1700m, to Lahaul-and-Spiti, the northernmost district, at 6500m. This geography and the resultant cool-to-snowy climate, define Himachal’s tourist attractions as well; in fact, tourism and apple-growing run the economy of the state. Sutlej, Beas, Ravi, and Parbati are the main rivers.

Given its mountainous nature, Himachal can best be understood in terms of its valleys. In the southern Kangra valley, Dharamsala and sister town McLeodganj are the focus of the Dalai Lama’s Tibetan government-in-exile. In western Himachal lies Chamba Valley, with Dalhousie, a British-time hill station. Towards the east, all the way to Tibet lies the Kinnaur region, which was off limits for tourists till 1992 and contains villages and lifestyles that are still untouched by modernity. In the centre, the Kullu valley is famous for its apples, producing about 9000 truckloads of them every year. Here, Manali town is a good base for adventure sports such as paragliding, skiing, river rafting and trekking. December-March are good months for winter sports or to see the snow. The northernmost Lahaul-Spiti district is isolated, snow-bound terrain accessible only between July-October, with some well-preserved 1000-year old Buddhist monasteries and culture. Himachal’s capital Shimla, developed by the British in the mid-19th century as a hill station that helped them escape hot summers, is full of colonial architecture and churches. Shimla makes a good base for less-crowded hill destinations such as Chail, Kufri, Narkanda, or Kasauli, all located at comfortable altitudes of 2000-2750 metres.