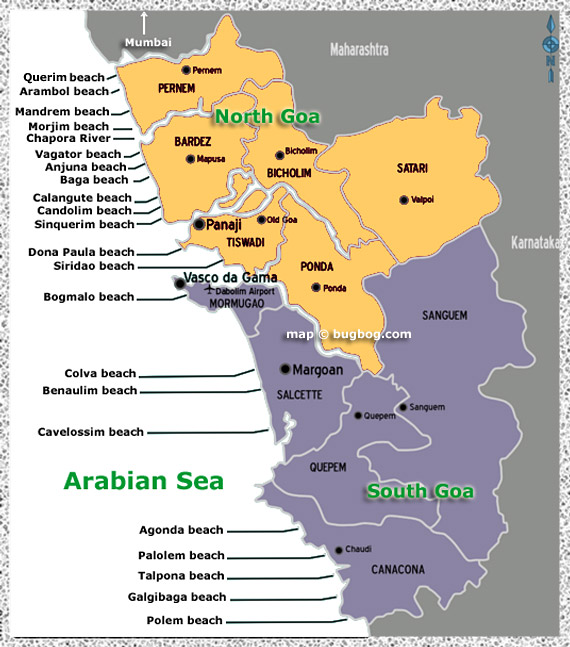 Goa is well known for its spectacular beaches. North or south, it is beautiful everywhere. There are many historical places in Goa but most of the tourists visit Goa only for the beaches. The peak tourist season for any beach in Goa is during Christmas and New Year, and during the summer in May. In the monsoon season, from June through September, the sea can be rough and swimming is prohibited.

Palolem is one of the most beautiful beach in Goa and is often called paradise beach. This beach  is also famous for water sports like diving, boat cruises and bike tours which are available in seasons.
How to reach: Palolen is quite near to Madgaon, 43KM. Govt Buses run regularly from Madgaon to Palolem

Aguada Beach in South Goa is more famous for the historical Aguada Fort which was built by the Portuguese to protect Goa from the foreign attacks. This Beach is one of the isolated place among Goa beaches that makes this place more beautiful, silent, and peaceful tourist attraction is not seen over here.

How to reach: Agonda by road is just 15 minutes from the busy Palolem beach.Regular buses depart from the Canacona bus station for Agonda (about 20 minutes). Buses from Chaudi and Margao are available few times a day.

Baga beach is one of the busiest and most attracted beach for tourists in Goa. The beach is quite famous for the water sports and fine dining restaurants.

How to reach: Baga Beach is located in North Goa, 9 kilometers (6 miles) from Mapusa and 16 kilometers (10 miles) from Panaji, the state capital. Buses run quite frequently from these places. The closest railway station to Baga is Thivim.

Colva is a beach located in south goa just 8 km away from Margao. And it is the closest beach to Margao.The beach is a white sand beach stretching across 20km towards south of Goa.
How to reach: You can take an auto rickshaw or a taxi to reach the beach from Margao

Dona Paula Beach is one of the popular tourist spot in Goa. This Beach is very close to Panaji, 7 km far. The beach is named after Dona Paula de Menzes, daughter of a viceroy (in colonial India), who threw herself off the cliff, when refused permission to marry a local fisherman, Gaspar Dias.

How to reach: Dona Paula Beach is well connected by road. Regular bus and taxi services are easily available from Panaji. The Kadamba Transport Corporation (Government of Goa Undertaking), and Maharashtra and Karnataka State Road Transport Corporations operate buses from and to Goa.

Calangute is one of  the most popular tourist destinations in Goa. It is located 13 km from Panaji and 8 km from Mapusa. It is often referred as ‘Queen of the Beache’ and largest among north goa beaches.

How to reach: The nearest railway station is at Thivim, and taxi from there takes about 20 minutes. Other railway stations are at Margao and Vasco da Gama. Frequent state buses go to and from other parts of Goa.

Let us know your favorite Goa beaches in the below comments section.