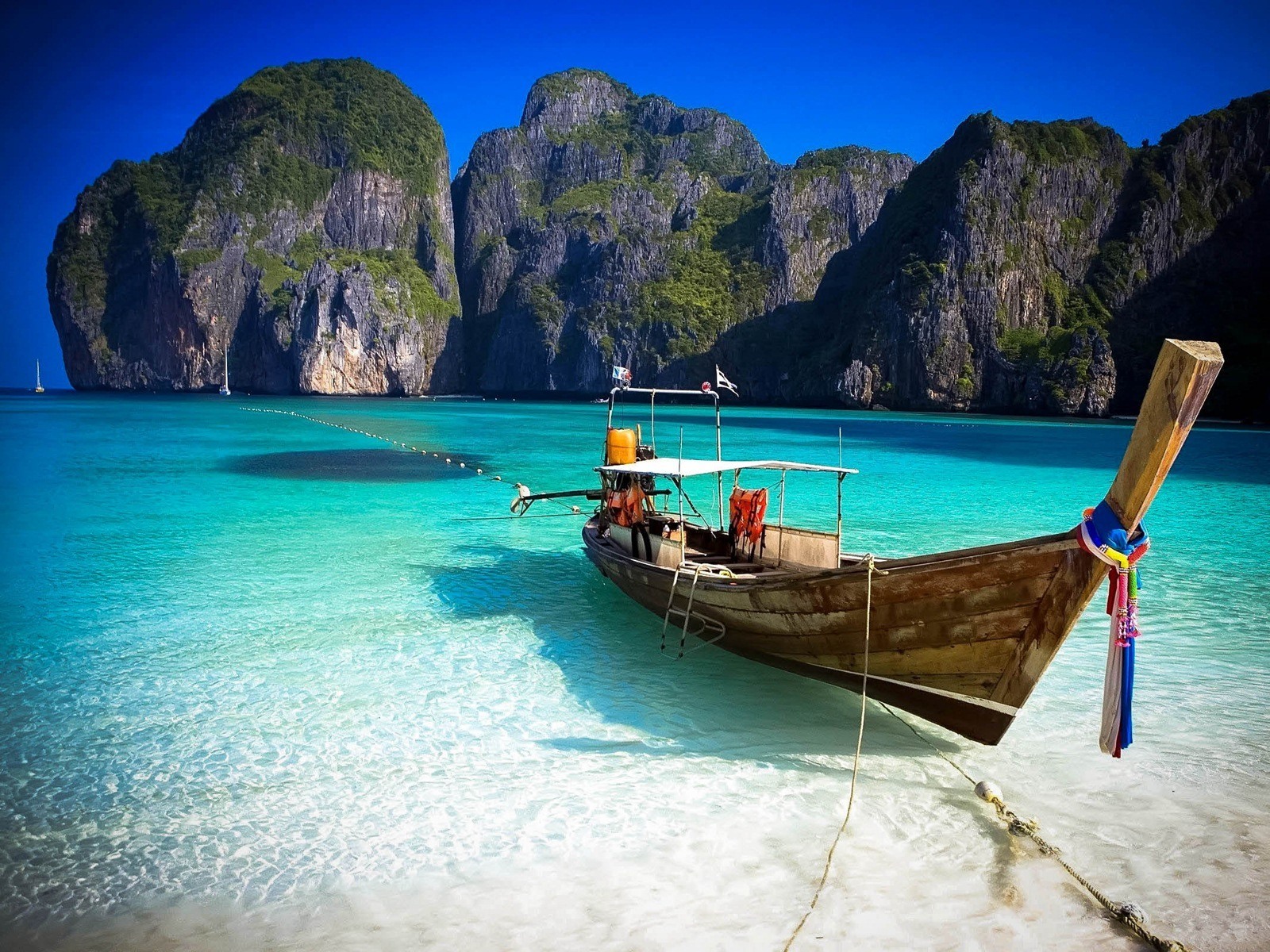 To arrive here at this paradise called Ko Phi Phi in southern Thailand, we had to fly in on Thai airlines from Bangkok to Phuket. Takes about an hour on a jet. Once in Phuket, a taxi drove us to the ferry terminal where we needed to board a ferry to take us to Ko Phi Phi, hereon called simply Phi Phi. The Phuket area was devastated by the tsunami, however I saw little evidence of this as obviously they had been hard at work repairing the damage since it hit. Can people still remember that awful catastrophe?

We had time on our hands so did a bit of shopping and sightseeing along the way, before arriving at the ferry terminal. On boarding the ferry it’s around a hour and a half at sea, before one arrives at this paradise.
Ko Phi Phi
This is the view from our room after we had just arrived with the sun going down behind the mountain. On arrival at the harbour we were met by our hosts and our luggage was hauled into a dragon boat which took us to the complex. Not far, around ten minutes by dragon boat. The luggage was removed by the hosts and then we stepped into the sea off the dragon boat, walked across the beach to the reception. Forewarned is forearmed, so do not go elegantly attired, rather just casual and don’t be concerned when you step off the boat, the water is calm and only ankle to knee deep. If you are still a youngster and agile, no doubt you can leap from the boat straight onto the sand. Alas, my wife and I can no longer do this.
From Phi Phi harbour by dragon boat
Gives one a clearer idea of what I was trying to explain in the previous module. Of course the pilot of the boat will attempt to get as much of the boat on the beach as he can. Tucked away on the far right towards the mountain is Ko Phi Phi harbour. Just so one can envisage where we are. From there dotted around the coastline are various different complexes, but this the one we chose.
A room on the beach at Ko Phi Phi

New York’s Well-known Searching Districts :
Once dropped off by the dragon boat and arranging our room at reception, we were taken by a very small truck to our room. From here on we had to walk everywhere we needed to go. Breakfast was included in the price but all other meals were at your own expense. Tea, coffee, sugar and milk were free in your room, along with a selection of cool drinks and beers, plus some light snacks, peanuts mainly and these were replenished on a daily basis. So the wife and I went down to the dining area just left of the reception area for a hearty breakfast. We then skipped lunch and had whatever drinks we needed and light snacks in our room, then walked down again for supper.

Now for reasons best left to myself, I have fallen on hard times and had not been on holiday for ten long years, but I’m just one of those people who have always loved the beach and the sea. I can plonk myself down on a beach, tan, swim and stare at the sea all day and I’m in my element and I don’t get bored. For the wife it’s different and she prefers to be more active, which I will get to later, but for me (first time in the East) I was in paradise and once again I will try and show you all this pictorially.