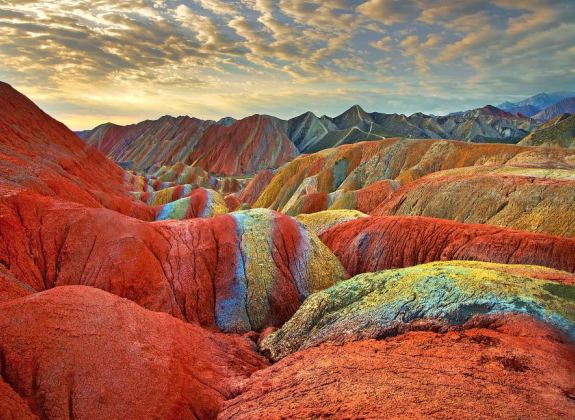 China is a paradise for travelers. Many wonderful tourist hubs in this country make China one of the most visited destinations in the world. After the magnificent Great Wall of China and Yangtze River, another site in China will take your breath away, on which this natural wonder is named Rainbow Mountain. This place is named Rainbow because it is the place you can find the end of a rainbow, but because the landscape has the same exotic colors as the rainbow. The Mountain also consists of hundreds of stripes of land with different colors such as red, yellow, and orange as the most common colors. Looking more carefully you will also find out that some hills have magenta, green, black and turquoise tints.

Located in deep inland of China, around 2,500 kilometers northwest of the vibrant city Shanghai, Rainbow Mountain or formally known as Danxia Landform Geological Park is one of the most spectacular natural phenomena that you can find in China, and even in the whole planet. This landform was formed naturally through the pressing of hundreds layers of sandstone and minerals with different colors for more than 24 million years long. Rains and storms for thousands of years also have a role to shape the mountain into a formation of flowing valleys. The mountain that we see now has reached to the shape of the rainbow mountain since 6 million years ago.

Although this site is not the only landform that has rainbow colors, the region of Zhangye, where this Geological park lies, has been chosen by UNESCO as the World Heritage Site in 2010. Other similar landforms are located in British Columbia called the Rainbow Range. This one, too, was formed from a mixture of various minerals and volcanic rock.

Many people visit this landform for honeymoons. Others like to use the gorgeous view as the background of their pre-wedding photos. Whatever your reason is, if you are interested to see this mountain with your own eyes, you can take a note of this following route to get to the site. First, get yourself to Lanzhou, the capital city of Gansua province. From there you can take a train that leaves regularly to Zhangye. This journey will take around five to eight hours, but you don’t need to worry about boredom. Many scenic views are available on your train window along the way until you get to your destination. After that, you can go to the bus station and take a bus that leaves for Danxia Geological Park. The buses usually leave every 30 minutes from 7 a.m. – 7 p.m. You can reach the park after an hour. The bus fare is only RMB 9 while the entrance ticket is RMB 40.